← Welcome to my “Sold in 60 secs” blog!
How much value the company’s personality can add to a brand? → 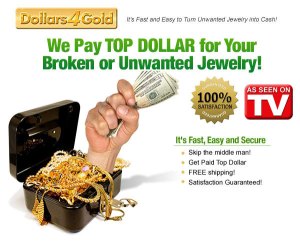 Have you ever watched a commercial for later start thinking: “Does anyone really believe in this ad idea?” or “Is this ad serious?.” Sometimes we watch commercials that it is too good to be true! Just to find out later that the ad was playing with audience emotions by only showing what the audience wanted to hear and it was hiding the real deal. One good example I can think about and I am sure everyone have heard about it, it’s the commercial “Dollars for Gold Canada” done by pitchman Anthony Sullivan (he was Billy Mays competitor!“Billy Mays here with another fantastic product!” Love it!). So here it is the “Dollars for Gold” commercial:

“Dollars for Gold Canada” claims: “Simple, Fast and promise to pay more than other national advertisers” For someone desperate to make some money fast, “Dollars for Gold” can be a very attractive idea. The idea of sending your unwanted gold jewelry () looks like easy, and fast. Interesting enough Mr. Sullivan never said how much per grams of gold the company will pay for you.

When I first watch this commercial I thought that selling my broken gold jewelry that I never used anymore could be an amazing idea. The commercial seemed authentic, since the service is endorsed by Sullivan who is a well-known pitchman, plus the commercial provided customers reviews, company profile and returns were guaranteed. suddenly questions started to put up in my head such as: – How the customers will know that they are getting paid the right amount of money for their jewelry? Is he telling the whole story? Later I found out that in fact the company wasn’t really being transparent and in fact it was hiding a lot information!

Here is the thing, today everyone with internet access can investigate the truth about your company, so if you are selling a service or a product you have to be transparent with your customers and share essential information in order to build a relationship of trust and fidelity with your clients. Trust goes hand in had with transparency! You can’t hide the truth from your customers, people want to know the details, and they will find soon or later the truth.

In my opinion “Dollars for Gold” wasn’t being transparent or honest. The company should had shown the vulnerability of selling gold jewelry in exchange for money, something simple as how much per gram of gold they would potentially pay for your unwanted gold jewelry.

“Dollars for Gold Canada” also have its own website. However, they failed to provide sources of other popular social media such as Facebook, twitter and so on. Would you still trust in this company? Would you still sell your 1900’s grandmother out of fashion gold jewelry ring in exchange for a few bucks? I wouldn’t!

After a little while that this commercial had been playing on TV, all the allegations that this service wasn’t authentic and wasn’t paying the right rate for grams of gold came up in the media . Sadly and expected there was no response from the “Dollars for Gold” company. Its website is still up for anyone in desperate need to sell some gold in exchange for money.

When it comes to business transparency, companies should follow some simple steps in order to gain customer fidelity. James Adams, wrote in her blog the “7 ways transparency can benefit your business” where she describes: “Transparency can help your business to grow. Openness about your successes and failures will inspire your customers to trust you when they see that you do not try to make your business seem better than it really is”.

One good, funny and simple example of the benefits of being transparent with customers is the commercial of an Indian bank called Geojit BNP Paribas:

The Geojit BND Paribas commercial really describes the importance of being transparent and having an open dialogue with its customers. I think is just like in any relationship, where you have to realize that you have negative issues, and that you have to address them as best as possible, of course, without hiding anything.

The bottom line is: Be transparent and honest with your customers in order to built a relationship of trust!

I want to hear from you: How many of you have bought a product or a service that later on find out that the company wasn’t being transparent?

← Welcome to my “Sold in 60 secs” blog!
How much value the company’s personality can add to a brand? →